Are Energy Drinks with High Caffeine Okay for Athletes? 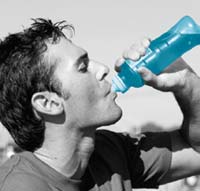 Are Energy Drinks with High Caffeine Okay for Athletes?

In our sports world today, athletes may look for that extra edge-a way to boost energy, improve endurance, quicken reaction speed and counter drowsiness.  Many athletes will consume energy drinks, unaware of the health and legal hazards.

In 2003, the NCAA instituted a list of banned-drug classes, including stimulants, anabolic agents and street drugs that are prohibited for use by NCAA athletes. Two common ingredients in energy drinks, taurine and guarana, were banned.  Caffeine is considered a restricted substance and not a banned substance.

The NCAA declared that athletes cannot have a caffeine concentration higher than 15 micrograms per milliliter (mcg/ml) in their body.   Doses of 3-6 mg/kg, which do not produce urine concentrations that would result in disqualification, have been found to be ergogenic (performance enhancing). One cup of regular coffee contains 100 mg of caffeine and a can of Red Bull contains 115 mg of caffeine, while the equivalence in urine within two to three hours is 1.50 mgc/mL and 1.73 mgc/mL respectively. In a healthy and average sized man, the NCAA limit may be reached by consuming five regular cups of coffee a few hours before drug testing. There may be variations of caffeine content in each product as well as metabolic differences unique to each athlete. Therefore, the safest action is to avoid consuming caffeine-containing products during athletic events.

Energy drinks — which are often loaded with caffeine, sugar and herbal stimulants — may pose various health risks, including:

• The caffeine in energy drinks can increase blood pressure and heart rate.  It has the potential to trigger dangerous cardiac arrhythmias.

• The caffeine in energy drinks can cause irritability, restlessness and nervousness. Excessive caffeine is also associated with headaches, tremors, nausea and insomnia.

• The caffeine in energy drinks may also be linked to increased risk of dehydration during exercise, which can lead to hampered performance as well as heat illnesses.

• The high sugar content in most energy drinks can contribute to undesired weight gain, and sugar high crashes.

The Shasta Orthopaedics Sports Medicine Team recommends against consumption of high caffeinated energy drinks prior to activity. Many of these drinks contain NCAA banned substances such as taurine and guarana.  We also do not recommend drinking more than two cups of coffee prior to activity based the adverse effects of high caffeine as stated above.

Welcome to the legacy blog of Shasta Orthopaedics where we provide articles and information on the orthopaedics industry and related topics.