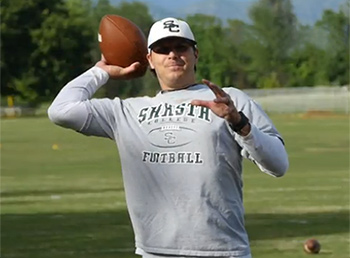 For Ben Weaver, football has been a major focus for most of his life. In fact, he calls himself a “Football Nerd”. As a kid he loved to toss the ball around with his siblings, he played in high school and college and even played on a semi-pro team while working at his current job as Assistant Coach at Shasta College. So when Ben dislocated and separated his shoulder and could no longer throw the ball to his team during practice, he went right to Dr. Schillen at Shasta Orthopaedics who found he had a torn labrum, torn rotator cuff and a bone chip in his shoulder. At the time Ben’s wife had a baby on the way so Ben delayed the operation for 6 months.

In December 2013 Ben went for surgery to repair the damage. Dr. Schillen told Ben it would take a year before he would be back to normal, but less than 11 months later Ben was back to throwing the football with his team at practice and could hold his baby boy (and future football enthusiast) without pain.

Watch the video below to learn more about Ben’s experience and see how far he’s come since his surgery: