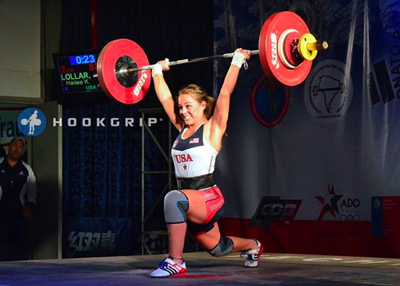 Sometimes life can take us on unexpected journeys. Those who are open to trying new things are often the most successful at seizing opportunities when they present themselves. That’s exactly what happened to Olympic hopeful and Redding resident, Hailee Lollar back in 2009 when she left competitive gymnastics after eight years, and opted to try her hand at CrossFit, an intense exercise program featuring dynamic exercises like plyometric jumps, while using non-traditional weightlifting equipment such as kettlebells, sand-bags, suspension systems or water-filled implements. It did not take long for Redding Barbell and CrossFit Club owner Bryan Schenone to see Hailee’s natural talent for strength and lifting and in 2011 encouraged her to begin adding Olympic lifting to her workouts.

It was at Schenone’s suggestion that she entered her first weight lifting competition (after only one month of training). To everyone’s surprise, then 16-year-old Hailee qualified for the Youth National Championships. Hailee skipped Youth Nationals that year, but traveled to Junior Nationals six months later and took second place in the female under 21, 53.1-58.1 kilo weight class. Hailee’s lifts are the “Snatch” and “Clean and Jerk”.

Since then, Hailee has competed with the 2012 Junior World Team, where she took 15th place at a competition in Guatemala. In 2013 she traveled again to Junior Nationals and took the gold medal in the Snatch event. That same year she also took 2nd place in the Snatch event and 5th place overall at the Pan American Championships.

Now a 19-year-old student at Shasta College with plans to transfer to a 4-year university, Hailee balances her studies with regular training. Her daily trainings take about four hours to complete. Hailee was invited to train at the Olympic Training Center in Colorado Springs where she headds during breaks from school to hone her skills under the guidance of Polish Coach Zigmunt Smalcerz, champion at the 1972 Olympics. When she’s at home in Redding, Hailee continues her training with Coach Schenone. 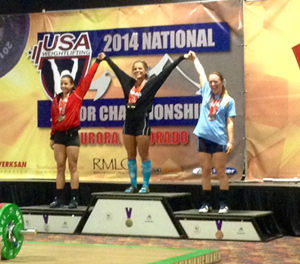 Hailee has her long term sights set on making the US Olympic Team in 2020 and competing in Tokyo.

According to Hailee’s dad, Dr. Lance Lollar, himself a retired professional mountain bike racer, Hailee has always been a competitive athlete with a strong work ethic. She has always been strong, beating boys at arm wrestling competitions in class and carrying her big sister around the house with ease.

“Hailee doesn’t look like a weightlifter. She’s a cute kid,” said Lollar. “We hope that strikes a chord with America. Hailee is a perfect example of why we should try different things that challenge us. You have no idea what your aptitude is.”

For Me. Inspirational Olympic Weightlifting

See Hailee in action in her video “For Me. Inspirational Olympic Weightlifting”