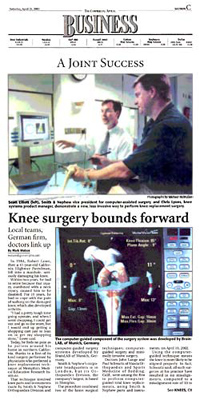 Redding, Calif. – In 1984, Robert Lowe, then a 41-year-old California Highway Patrolman, fell into a manhole, seriously damaging his knee.

Within two years, he had to retire because that injury, combined with a neck injury, caused him to be disabled. For 19 years, he had to cope with the pain of walking on the damaged knee, which also developed arthritis.

“I had a pretty tough time going upstairs and when I went shopping, I could get out and go to the store, but I would end up getting a shopping cart just to lean on to get my shopping done,” Lowe said.

Today, he feels no pain as he putters around his home in Northern California, thanks to the first-of-its kind surgery performed by physicians who perfected a knee replacement technique at Memphis’s Medical Education Research Institute.

That technique involved knee parts and instruments made by Smith & Nephew Orthopaedics Division and computer-guided surgery systems developed by BrainLAB of Munich, Germany.

Smith & Nephew’s corporate headquarters is in London, but its Orthopaedics Division, the company’s largest, is based in Memphis.

Doctors John Lange and Paul Schwartz of Shasta Orthopaedics and Sports Medicine of Redding, Calif., were among the first to perform computer-guided total knee replacements, using Smith & Nephew parts and instruments, on April 10, 2002.

Using the computer-guided technique means the knee is more likely to be aligned properly. In fact, Schwartz said, all such surgeries at his practice have resulted in no misalignments, compare to a misalignment rate of 10 to 20 percent of standard surgeries.

The biggest reason for failure in total knee replacements is that the plastic on the top of tibia (shinbone) wears out because its not aligned properly, said Scott Elliott, Smith & Nephew vice president for computer-assisted surgery.

But while computer-guided surgery reduces the risk of misalignment, it has heretofore required incisions of 8 to 10 inches.

Minimally invasive surgery involves an incision as mush as 60 percent smaller, reducing the chance of infection and rehabilitation time. In Lowe’s case, the incision is about 4 inches.

To learn about minimally invasive knee replacement, Lange and Schwartz assisted a surgeon trained in it. On April 9, they cam to Memphis to perfect their technique on anatomical specimens at MERI.

On April 16, Lange performed computer-guided, minimally invasive total knee replacements on Lowe and a 53-year-old woman. On April 17, Schwartz did it on an 82-year-old man. Smith & Nephew announced these developments Wednesday.

Mark Landy, a Boston-based analyst who covers medical device companies for LEERINK Swan & Co., said these techniques are part of a wave of innovation in minimally invasive, computer-guided Orthopedic surgery.

“When it comes to surgery, less is more,” Landy said. “One of the last bastions of open surgery is Orthopedics. …It wont be tomorrow, and it wont be the next day, but within your lifetime and my lifetime, minimally invasive Orthopedic surgery is going to be the standard. …Right now, it’s kind of like the rock star doctor.”

Elliott said his company estimates 15 to 25 percent of all Orthopedic surgeries will be done using some form computer-assisted navigation by 2007, compared with 2 percent or less today.

Schwartz said, “I think we’re just kind of fortunate to be the first ones out of the box.”