back to Orthopaedics Careers 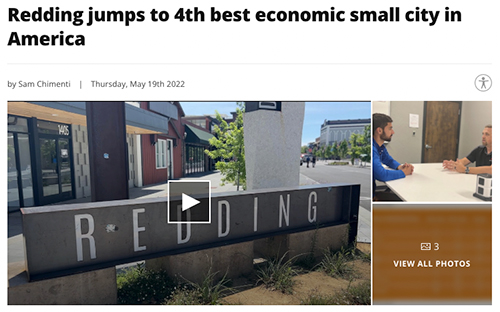 Not Just A Career, But A Lifestyle

Redding is in a beautiful portion of Northern California. The population of our catchment area is approximately 370,000. Redding and the near by community of Red Bluff is serviced by three acute care hospitals, St. Elizabeth’s Community Hospital in Red Bluff; and Shasta Regional Medical Center and Mercy Medical Center, a level II trauma center. Redding also has a comprehensive in patient rehabilitation hospital, Northern California Rehabilitation Hospital. The Redding facilities are all within three miles of our office.

The City of Redding is situated in the center of California’s most pristine recreation area and has all the conveniences of a modern city. Blue skies are reflected in the majestic Sacramento River as it makes its way through the city from the heavily forested and snow-capped mountains which surround this beautiful city.

Less than an hour’s drive from Redding are lakes, waterfalls, State and National Parks, museums and gold rush ruins. They beckon you to experience this special part of the Golden State. 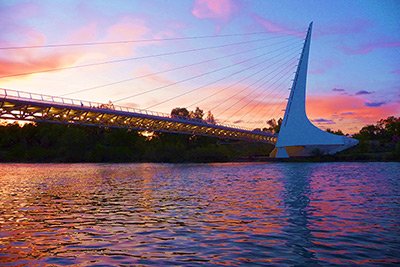 The Sundial Bridge at Turtle Bay crosses the Sacramento River in the heart of Redding, California. Open July 4, 2004, the bridge links the north and south campuses of Turtle Bay Exploration Park and serves as a new downtown entrance for Redding’s extensive Sacramento River Trail system.

The bridge celebrates human creativity and ingenuity, important themes of the 300 acre Turtle Bay Exploration Park. The steel, glass, and granite span evokes a sense of weightlessness and the translucent, non-skid decking provides for spectacular viewing at night. The bridge is also environmentally sensitive to its river setting. The tall pylon and cable stays allow the bridge to avoid the nearby salmon-spawning habitat ­ there are no supports in the water ­ while encouraging public appreciation for the river. Plazas are situated at both ends of the bridge for public use; the north-side plaza stretches to the water allowing patron¹s to sit at the river’s edge.

Turtle Bay Exploration Park is a sprawling 300-acre campus filled with educational and entertaining activities all focused on the interpretation of the relationship between humans and nature. Spanning the Sacramento River and linked by the Sundial Bridge, the Park tells the story of the region and its people.

13 waterfalls are within driving distance of Redding and can be seen over the course of several days. But five of the most awe-inspiring cascades can easily be reached in one day.

National Geographic: Where to see northern California’s most spectacular waterfalls »

An Introduction to the Redding Area

Here is an introduction to some of the great features you can enjoy living in the Northstate.

When the Cascade Theatre was built in 1935, Redding’s population was only 7000, but this opulent movie palace seated almost 1350. Designed by San Francisco architect J. Lloyd Conrich, and built by T & D, Jr. Enterprises, the Cascade was constructed in the midst of the Depression as a showcase for first run movies and vaudeville.

Shasta Lake, keystone of the Central Valley Project, is the largest man-made reservoir in California. When full, its 365 mile shoreline exceeds that of San Francisco Bay. Shasta is the second largest and tallest concrete dam in the United States. It was constructed between 1935 and 1945, and the lake was filled in 1948.

The construction of Shasta Dam impounded three major north state rivers: The Pit, McCloud, and Sacramento. Referred to as arms, each one retains its own character, environment, history and recreation opportunities.

People who have never been to Shasta Lake may get the impression they are seeing several lakes as they pass by on Interstate 5. In a way, there really are more lakes than one. The rugged country, ragged shoreline, and sheer size of Shasta Lake tends to break the lake into different areas, each with its own opportunities, moods, and settings.

Burney Falls is not the highest nor largest waterfall in the state, but many people consider it the most beautiful. Unlike other waterfalls here or elsewhere, it continues to flow at the same rate all year long: about 100 million gallons every day. The strikingly clear, pure water flows from openings in the volcanic rock at and above the falls. The water temperature, even on hot summer days, is about 42 degrees fahrenheit. The 129-foot-high waterfall cascades into an almost iridescent pool underneath. Light penetrates deep into the clear water, reflecting a cool blue color.

Lassen Volcanic National Park is located in Northeastern California at the southern terminus of the Cascade Mountains, approximately 50 miles east of Redding, California. All four types of volcanoes in the world are found in the park. Over 150 miles of trails and a culturally significant scenic highway provide access to volcanic wonders including steam vents, mudpots, boiling pools, volcanic peaks, and painted dunes.

A National Natural Landmark in the midst of Shasta-Trinity National Forest, Mount Shasta is certainly visible. It’s the highest point in California’s Cascades, and the largest volcano in the contiguous 48 states. Mount Whitney is taller by 332 feet, and other mountains are bigger by other measurements, but their grandeur is lost among other lofty peaks. Not so Shasta, which stands alone at 14,162 feet and towers almost 10,000 feet above the surrounding countryside. Lonely as God, white as a winter moon.

There is always snow on Shasta—or at least, so far, in our reckless climate change experiment. Hikers and backpackers walk up into it via forest trails from spring to early September, but only the fit and fairly determined get to the top. The truly intrepid tackle technical climbs, almost any time.

Lake Siskiyou named one of America’s best lakes to fish on Veterans Day. It is stocked with rainbow and brown trout, with largemouth and smallmouth bass prowling about.

Lake Siskiyou lies on the Sacramento River and is impounded by the Box Canyon Dam on its eastern shores.

Chico Theater Company (CTC) provides theatrical awareness to our community and shares the benefits of the performing arts.